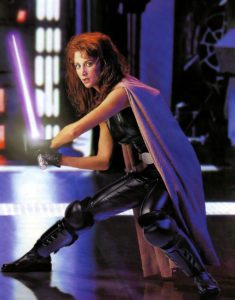 Mara Jade Skywalker – Who in the Galaxy is That? – by Pariah Burke

Who in the Galaxy is That? – Mara Jade Skywalker

She is the single most popular Star Wars character who has never been in a film. Despite that, Mara Jade, later Mara Jade Skywalker, has appeared in dozens of Star Wars novels, another few dozen comic book series and graphic novels, the Return of the Jedi radio drama

, and a handful of video and tabletop games. She even has action figures.

, he did so by introducing a trio comprising the most beloved and enduring characters not to appear on celluloid. In Heir to the Empire

, Zahn brought to the galaxy the villain Grand Admiral Thrawn, who made the jump back to canon in the animated Star Wars: Rebels

, the smuggler-king Talon Karde, and the only other Jedi the Emperor spared during the Order 66 Jedi Purge, Mara Jade. Like Anakin Skywalker, Emperor Palpatine spared Mara Jade, recruited and trained her, and made her is personal agent, the Hand of the Emperor.

While Darth Vader was the Emperor’s public enforcer, the beautiful and seductive Jade was his silent and shadowy assassin. The Emperor’s dual favor placed Vader and Jade into a rivalry that served and amused him. Palpatine treated the two differently, however. With Vader, the Emperor and Sith Lord maintained the relationship dictated by the Sith Rule of Two—he the master and Vader the apprentice who would one day murder and replace him. With Mara Jade, the Emperor nourished a firm but fatherly relationship. Jade was content to serve him as Hand, without expectation that she would one day succeed him. She was therefore emotionally broken upon the death of the Emperor aboard the Death Star II during the Battle of Endor (in Return of the Jedi). She blamed Luke Skywalker for the Emperor’s death; her receipt of a posthumous order from Palpatine himself to kill Skywalker solidified her intent.

In every way Luke Skywalker’s equal, Mara Jade nearly succeeded in killing him. Common goals forced the two to work together, and Skywalker eventually broke through Palpatine’s conditioning of Jade. The two became allies, then lovers, and, ultimately, parents.With or without Skywalker, Jade is a fan-favorite of such incredible appeal that her every appearance in all media is celebrated, and her demotion from official, or canon, Star Wars to live only in the non-canon Star Wars Legends universe was mourned more universally and deeply than even the death of Chewbacca (during the Yuuzhan Vong War in Legends). Fans all over the world raged against the decision to render Jade non-canon and exclusively part of the alternate reality of Legends.

Men, women, teenagers, and even children adore the character of Mara Jade as they love Luke Skywalker. She’s easily mistaken by the uninitiated as a fire-haired mirror of Skywalker. Like him, she’s an orphan, one of the best pilots in the galaxy, and a Jedi who eventually becomes a Jedi Master with a council seat and classes taught at Skywalker’s resurrected Jedi Academy. She’s more complex than a simple feminized Skywalker, however. Her personality and experience encompass areas absent from Skywalker’s, often using her strengths to fills his weaknesses, and his strengths her weaknesses. Where Skywalker has always been the hero, Jade began as a villain, an assassin unquestioningly killing anyone the Emperor deemed a target—Rebels, Imperials, and non-military personnel alike. She also became an accomplished smuggler and computer slicer (hacker). Skywalker is ever the naïve, hopeful farm boy; Jade is his street-wise, realistic complement and foil. Their relationship is literary platinum and, in most fans minds, is even more interesting and fulfilling to follow than Han’s and Leia’s.

as Rey’s mother.
As a child, Rey, the Force-sensitive heroine of Episode VII: The Force Awakens

with innate piloting ability, was abandoned on a desert planet at about the same time Luke Skywalker placed himself into exile. Skywalker, of course, is a Jedi Master with innate piloting ability who had grown up on a desert planet and the son of a Jedi with innate piloting ability who had grown up on a desert planet. Skywalker’s paternity of the girl is an obvious possibility. If that theory proves true, his daughter needs a mother. At the end of the film, when we finally see the Kenobi-like Skywalker, he’s standing beside a rock some fans claim is a headstone. Whether the rock is or is not a grave marker, the terrain, Skywalker’s bearing, earlier statements regarding his self-imposed exile and its precipitating event, and the allusion to Skywalker as the new Yoda all clearly communicate a sense of the Jedi Master’s isolation. Should the theory of Rey’s parentage prove true, then Mara Jade may be posthumously identified as Rey’s mother. In such a case, it would be unlikely that Jade would be discussed much beyond the identification and a brief commentary on her personality and loveliness in answer to Rey’s inevitable request, “tell me about my mother.” Thus, Disney naming Mara Jade as the mother of the new generation of Jedi savior would be a minimal disruption to the film while paying maximum service to the fans. Of course, Disney could also float Jade’s name as Rey’s mother as a means for gauging interest in a potential Emperor’s Hand: A Star Wars Story film set earlier in the continuity.

Whether Mara Jade ever appears on the silver screen beside her Legends husband, she will always hold a fond place in many fans’ hearts.
To acquaint yourself with this amazingly popular, powerhouse character, you have many opportunities in nearly all media. The best place to start is with Timothy Zahn’s seminal trilogy, which starts with Heir to the Empire

and continues through Dark Force Rising

and The Last Command

. Once you’ve been properly introduced to Jade you can follow along in sequence with virtually any mass market or Young Adult Star Wars novel released after 1994. Zahn’s follow-up duology, The Hand of Thrawn

, comprising Specter of the Past and Vision of the Future, is the perfect second step as it brings together all three of the fantastic characters Zahn used to launch Legends (né Expanded Universe): Thrawn, Talon Karde, and Mara Jade.
At any point in the process of falling in love with Mara Jade you could jump over to more visual stories with the Mara Jade: By the Emperor’s Hand

graphic novel from Darkhorse Comics. The wedding of Mara Jade and Luke Skywalker is chronicled by veteran Star Wars novelist Michael A. Stackpole in the graphic novel Star Wars: Union, which is another excellent story even if you don’t typically read comics.

You can even be Mara Jade in the Jedi Knight: Mysteries of the Sith

, in which the model Shannon McRandle (then Shannon Baksa) was cast to transform Mara Jade from ink and paper into flesh and fiery hair.

Play as Mara Jade in Jedi Knight: Mysteries of the Sith. Courtesy of LucasArts/Disney.