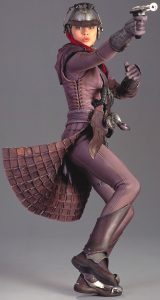 One of the highlights of Episode II: Attack of the Clones

is the multiple assassination attempts of Senator Padme Amidala on Coruscant, and the subsequent reveal of the would-be killer. The reveal of Zam Wesell rectifies the glaring absence of bounty hunters from the Prequels to that point. It also sets the stage to reveal the high-profile supporting role Jango Fett would come to play throughout the remainder of Episode II—from the moment he silences Wesell to his dramatic demise in the arena during the Battle of Geonosis.

The unaligned bad guys of Star Wars, ubiquitous throughout all Star Wars media since their unexpected popularity from barely 60 seconds of screen time in Episode V: The Empire Strikes Back

, Boba Fett: The Fight to Survive

, and The Life and Legend of Obi-Wan Kenobi

a long association between the two bounty hunters is described.

The two first meet during a mutual hunt for smuggler Bendix Fust. Working independently, the two foil each other’s plans; Wesell even attempts to steal Fett’s ship. During their dispute, their fired upon a Firespray-class ship, which destroys Fett’s ship. They subsequently steal the Firespray-class ship, which Fett keeps and later rechristens to his iconic Slave I. The two hunters split the bounty on Fust and immediately partner on another job, sparking a friendship and working relationship that would see them through a dozen other jobs on as many worlds. Wesell even befriends Fett’s clone/son, Boba Fett, on Kamino.

Wesell rarely works without Fett—or does so beyond the view of a novel, comic book, or game chronicler—making her death at his hands in Attack of the Clones both startling and poignant.

, which describes in-canon missions accomplished by the pair in the days between Episode I: The Phantom Menace

and their simultaneous screen debuts in Attack of the Clones. Wesell is also a playable character in LEGO Star Wars: The Complete Saga