You are here: Home / Articles / Kit Fisto – Who in the Galaxy is That? – by Pariah Burke

The famous Kit Fisto smile debuts during the Battle of Geonisis. Courtesy of LucasFilm/Disney.

Fighting in the Battle of Geonosis with a smile on his face, Jedi Master Kit Fisto instantly piques the interest of Star Wars fans. Of the 200 Jedi who traveled to Geonisis in Episode II: Attack of the Clones

to rescue Obi-Wan Kenobi and Anakin Skywalker, Fisto leads the charge in the arena. Admist the grim and determined countenances of the Jedi, Fisto’s is the only smile to grace a battlefield littered with fallen droids and the bodies of Geonisians and Jedi.

The Nautolan Jedi Master becomes famous for his easy smile and positive attitude in and out of combat, even inspiring fanfiction in the aptly titled short story “Kit Fisto’s Smile.”

Following the Battle of Geonosis, he appears only once more in the films, as part of Mace Windu’s party intent on arresting Chancellor Palpatine in Episode III: Revenge of the Sith

. When Palpatine reveals himself to be the titular Sith bent on revenge against the Jedi, Fisto’s smile falters. Moments later, despite fighting bravely, he’s dead by the hand of Palpatine, also known as Darth Sidious. On screen, his smile is absent at the time Palpatine strikes him across the torso, killing him, but in the novelization of Revenge of the Sith, Fisto is beheaded while wearing his trademark smile—at least, this is what we’re mean to infer from the fact that Anakin Skywalker comes to find Fisto’s smiling head sitting detached atop Palpatine’s table.

Between his live action debut and demise, Fisto’s smile and green lightsaber feature in short appearances on television, the Web, and in print.

Including the official comic book adaptations of Attack of the Clones and Revenge of the Sith, he is a supporting character, or is mentioned, in more than 25 issues of various Star Wars comic book series from Dark Horse Comics. The latest in terms of Star Wars timelines is as a hologram in Star Wars: Darth Vader and the Ghost Prison

. He was also a common character in Reversal of Fortune

, as well as Dark Lord: The Rise of Darth Vader

and the young adult The Last of the Jedi: The Desperate Mission

, a whimsical book that pits two characters against each other and describes which would win in a fight. Fisto faces off against Darth Maul. 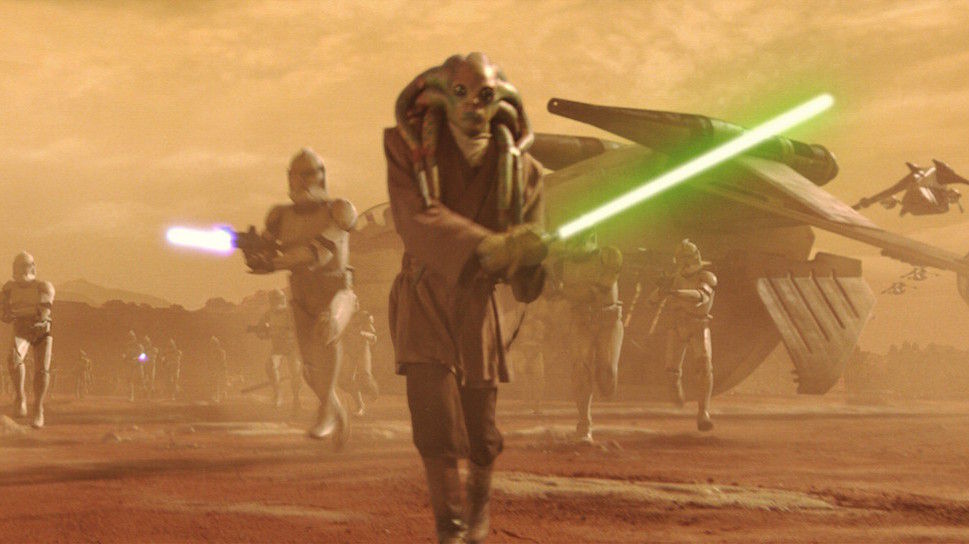 Kit Fisto leading a Clone Trooper unit charge during the Battle of Geonosis. Courtesy of LucasFilm/Disney.

, which begins the entanglement of Fisto’s appearances with those of General Grievous, the four-armed cyborg antagonist in Revenge of the Sith.

That association carried through comics and onto television with Fisto fighting Grievous on a number of episodes of both incarnations of the animated television Star Wars: The Clone Wars

On the show, Fisto fought Grievous to a standstill and even gaining the upperhand while severing one of Grievous’s four hands. Without the timely intervention of Grievous’s IG-100 MagnaGuards, Fisto likely would have arrested or killed the Separatists’ top general.

Other episodes explored Fisto’s amphibious nature as a member of the Nautolan species. On the aquatic planet Mon Cala, home to future Rebel Alliance Admiral , Fisto commanded a squad of clone troopers in the defense of the Mon Calamari against the planet’s other sentient species, the Quarren. During such underwater missions, Fisto’s biology and unique Force-training focus became evident. As a Nautolan, Fisto was raised in and around water, possessing the ability to breath underwater as well as a comfort moving and fighting there. He further enhanced his underwater combat abilities by orienting his personal Force-training to the task, resulting in an ability to swim with great speed commensurate with the increase in running speed many land-loving Jedi teach themselves.

Beyond The Clone Wars, the only other substantive story of Kit Fisto is the tragically no longer canon novel The Cestus Deception

by Steven Barnes. In the book, the Separatists have begun building bio-technical Jedi-killing droids on the planet Ord Cestus. Obi-Wan Kenobi leads a diplomatic mission to negotiate with the Cestian leadership in hopes of ending the production of the droids. Simultaneously, the less politically adept Jedi Master Kit Fisto is sent to work another side of the same problem by instigating and training a rebellion from the citizens of Ord Cestus. The story is a high point for anyone hoping to learn about Fisto. Not only does it contain Fisto getting nearly equal coverage to A-list star Kenobi, it also allows both Jedi Masters to show of skill sets and roles not found in the other appearances. The Cestus Deception, published during the run of The Clone Wars, ties in tightly with the show, including casting show original villain Asajj Ventress as the chief antagonist who fights both Fisto and Kenobi in dynamically-written lightsaber duels.

Behind the scenes, the design of Kit Fisto was originally created to be the representation of the Sith species. When that idea was abandoned, the tentacled, large-eyed countenance was going to be an individual Sith Lord to appear in Attack of the Clones. That Sith Lord would, after many design revisions and a gender swap, become Asajj Ventress. Lucas asked for the Sith alien design to be refined and softened, with the formerly ghost white skin turned green. The result was Kit Fisto. 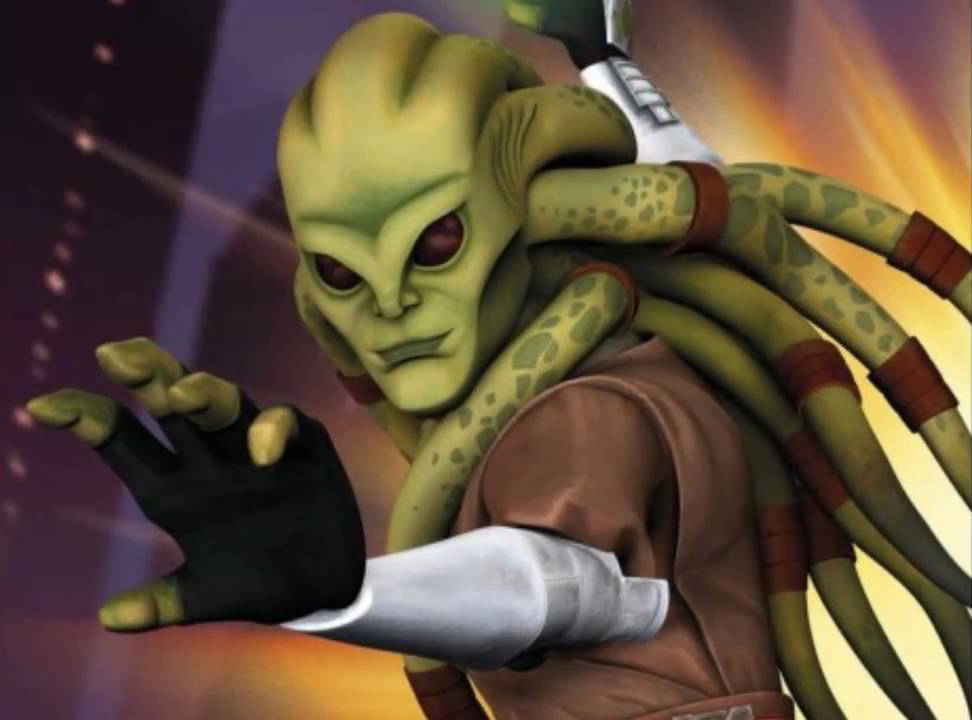 In the Sony PSP in Star Wars: Battlefront: Renegade Squadron

, Kit Fisto is a hero who can be played on the planets Ord Mantell and Sullust. He also appears in the PSP and Nintendo DS follow-up game Star Wars: Battlefront: Elite Quadron

, as well as on all platforms in the LEGO Star Wars III: The Clone Wars

, and several other video games.