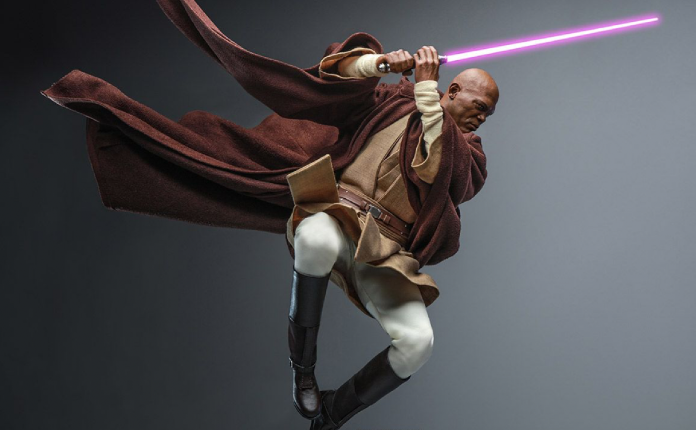 It may only just be the start of 2023, but Hot Toys is planning even further ahead when it comes to releasing more epic Star Wars items. Now the company has revealed that a sixth scale figure of Samuel L. Jackson’s Jedi Master, Mace Windu, is in development and will be arriving at some point in 2024.

Part of the company’s range of products released to celebrate the 20th anniversary of Star Wars: Attack of the Clones, this meticulously-crafted figure features a detailed likeness of the actor, complete with newly-developed head sculpt. This updated version of Mace Windu includes a finely-tailored Jedi robe and tunic, LED light-up lightsaber, a holocaster with a hologram of Yoda and a display base.

In addition, the 32 cm tall figure also comes with over 30 points of articulation, five pieces of interchangeable hands and a bonus pair of forearm armour inspired by Mace Windu’s appearance in the Star Wars: The Clone Wars animated series. The Hot Toys set is rounded out with specially-designed Star Wars: Attack of the Clones 20th anniversary window packaging, allowing the figure to be displayed in and out of its box.

The Mace Windu sixth scale figure is distributed in the US by Sideshow and can be pre-ordered today for $279, with shipping expected sometime between January to June, 2024.