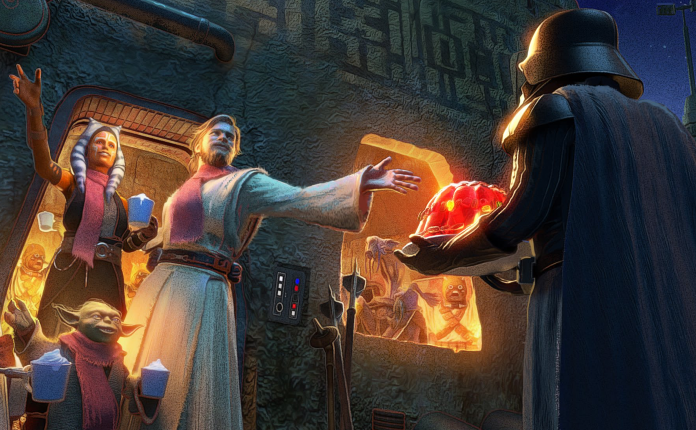 As an annual tradition, Lucasfilm has created an all-new Star Wars-themed Christmas card for 2022, featuring a unique mix of characters.

Lucasfilm has been sending Christmas cards to friends and corporate partners since 1977, most of which have featured striking designs and original artwork. The company’s first holiday card was mailed out in 1977, although it was fairly basic and ultimately forgettable. However, Lucasfilm then began an annual tradition in 1978 with an illustrated Christmas card design, one that featured iconic artwork of C-3PO and R2-D2 created by the legendary Ralph McQuarrie.

The rare card showed the two droids out Christmas shopping for gifts, albeit in a then-modern high street, rather than a galaxy far, far away. The holiday card was distributed by Star Wars Corporation’s UK office, as the production company created by George Lucas was known at the time. Over the years, many such Lucasfilm Christmas cards have appeared, complete with tongue-in-cheek festive scenes featuring Santa Yoda, C-3PO and R2-D2 playing musical instruments, Christmas carol-singing bounty hunters and many others.

The holiday tradition continues in 2022, with Lucasfilm revealing its latest Christmas card design created by artist Aaron McBride. This time around it’s a landscape image featuring a Tatooine scene complete with multiple characters such as Obi-Wan Kenobi, Ahsoka Tano, Yoda, R2-D2, Darth Vader, Dexter Jester, Commander Cody and more. What’s particularly interesting about this year’s card is that the non-canon illustration includes many fan-favourite Star Wars faces who would never actually have been in one place at the same time. Fortunately, such is the magic of Christmas and the power of the Force…