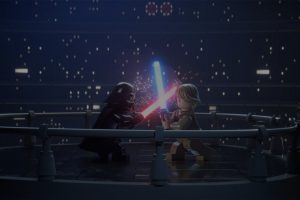 The week’s newest Star Wars-related news and most entertaining content–curated by a Star Wars fan, for the Star Wars fan…

"We explain why Darth Vader was so loyal to his master Palpatine or the emperor of the galactic empire. We explore his physiological chains as well as physical chains and master plan and manipulation that resulted in Vader being so loyal to a master he originally intended on overthrowing. We explain the reasoning from Sith doctrine to the flaws of Anakin Skywalker himself. "

Imperial Code Cylinders – What They Are and What They Do – YouTube

"The Non-Canon Expert describes what Imperial Code Cylinders are and why they were adopted by the Galactic Empire. "

"Kylo Ren has a new look for Star Wars The Last Jedi, but what does it tell us about the plot of the movie? Jessica has the reveal (with SPOILERS) on today’s Nerdist News! "

"You’d think most actors would jump at the opportunity to feature in the galaxy far, far away, what with the franchise’s uncanny ability to make stars at the drop of a hat. However, sometimes a dream come true can often turn into an unbearable nightmare, as proven by these 6 Star Wars actors who hated their roles! "

"The clone army battled the fierce droids using superior tactics but what would of happend if both the republic and CIS had droid armies? "

"Industrial Light & Magic’s visual effects supervisor John Knoll has been telling stories in the “Star Wars” universe for many years, though typically in segments and pieces, providing some of the prequel saga’s most lavish and eye-popping FX. But the tale of “Rogue One” was, from the outset, entirely his brainchild. "

Rogue One: A Star Wars Story: The Battle of Scarif’s biggest moment was barely scripted | SyfyWire

"And almost none of that was directly in the script, EP and VFX Supervisor John Knoll told Syfy Wire during a visit to Industrial Light and Magic in San Francisco. "

"One of the coolest things about star wars is just how many call star ships there are. But do we actually know how big the largest ones are? Well we’re going to take a look at the biggest of the biggest star ships starting with the millennium falcon, to the imperial class star destroyer all the way to the death star and we’ll compare to things in our real physical world. "

Why Did Darth Vader Die in Return of the Jedi? – Star Wars Explained – YouTube

"In Star Wars Return of the Jedi, why did Darth Vader die? Was it at the hands of Luke Skywalker? Emperor Palpatine? Or did he lose the will to live like Padme? "

"The guys from Making Star Wars may have very well figured out the name of the planet represented by the real-world city of Dubrovnik in The Last Jedi. Since we’re not sure if the name is intended to be a surprise and if you’re trying to stay away from spoilers, stop reading now. "

"Despite all of this solid storytelling though, there still remains a surprisingly large number of unresolved plotlines to be covered and a variety of characters that need to make an appearance on the show before its timeline inevitably reaches “Rogue One” and “A New Hope.” Here’s everything that needs to happen in “Star Wars: Rebels” Season Four. "

"Why couldn’t more Jedi sense Order 66 in Revenge of the Sith? In Revenge of the Sith we see Yoda is able to sense the death of his Jedi brothers and sisters and react to the betrayal of Palpatine and the clone troopers but why didn’t more Jedi including Obi-Wan sense the death of so many Jedi by the clones they fought beside? In this video we answer that very question. "

"C3PO played a huge part in Anakin Skywalker’s childhood and development. But when Anakin turned into Darth Vader did he continue to keep his connection to his beloved protocol droid. We analyze all the major star wars movies as well as some legends to see if Darth Vader was actually spying on the rebellion using C3PO. "

Timothy Zahn on His Novel Thrawn, How to Pronounce the Grand Admiral’s Full Name, and More | StarWars.com

"THE CREATOR OF THE FAN-FAVORITE IMPERIAL STRATEGIST SPEAKS. "

"In the video, Hamill lends his voice to Han Solo in a killer impression. Though Han Solo gets much of the attention, characters like Rey, Finn and General Leia all get the spotlight as well. Hilariously, the video also gives voice to characters like Chewbacca and BB-8, who becomes a gruff droid named Ricky now that he can “speak.” "

"Back in the 1980’s, a few Chinese publishers released comic book adaptations of George Lucas’ blockbuster smash hit film Star Wars. One Chinese retelling was packed with illustrations showing scenes from the famous 1977 blockbuster film. However, beyond Darth Vader, C-3PO, R2 and a few other characters, the book was vastly different from the movie’s storyline. This is by far one of the most interesting movie adaptations ever created. You’ve got to see this!"

"Sit down with Riz Ahmed and hear his untold stories from playing pilot Bodhi Rook in Rogue One: A Star Wars Story. "

"What did they tell you about your character and how to portray him? Did they give you any background information for instance?"

"In this behind-the-scenes clip from Rogue One: A Star Wars Story, director Gareth Edwards reveals some of Riz Ahmed’s numerous auditions for the role of Bodhi Rook. "

"The official Star Wars Twitter feed takes a look at the instantly iconic U-wing, a vehicle so deftly designed in the OT style, if it turned up in a Return of the Jedi special special special edition no one would bat an eyelid. "

John Knoll Interview: How Many VFX Shots Are in Rogue One?

"Right now, we have an interview with Knoll where he told us how many visual effects shots were in Rogue One (including comparing the number to the rest of the Star Wars library), why recreating concept artist Ralph McQuarrie‘s designs for the Death Star with visual effects was so difficult, and much more about the visual effects of the movie. "

10 Things We Learned from Rogue One: The Ultimate Visual Guide | StarWars.com

"AS ROGUE ONE FINALLY ARRIVES HOME, HERE’S NEW INTEL THAT WILL TAKE YOU DEEPER INTO THE FILM."

"It was a day long remembered: October 30, 2012. The day Disney announced it had bought Lucasfilm and would be releasing new Star Wars movies. Fans everywhere immediately began freaking out about the news, but one in particular saw it as an opportunity."

Designing an Empire: Doug Chiang on Imperial Architecture in Rogue One | StarWars.com

"THE ROGUE ONE CO-PRODUCTION DESIGNER DISCUSSES CONCEPT ART THE EMPEROR WOULD LOVE."

"In celebration of Star Wars’ 40th anniversary, Del Rey is going to shine the spotlight on those unsung weirdos, heroes, and villains with a unique, new anthology. Star Wars: From a Certain Point of View, coming October 2017, will bring together more than 40 authors for 40 stories. Each will be told from the perspective of background characters of A New Hope — from X-wing pilots who helped Luke destroy the Death Star to the stormtroopers who never quite could find the droids they were looking for. There’s never been a Star Wars book like it, and you can get a first look at the cover below!"

"Two stars of the Star Wars films will be receiving Disney’s highest honor.  Luke Skywalker actor Mark Hamill and Princess Leia actress the late Carrie Fisher will be honored as Disney Legends in a ceremony at the D23 Expo in Anaheim, California this July.  Other new Disney Legends being honored include Oprah Winfrey and Stan Lee.  "

Alan Tudyk Thought the Director of Rogue One Just Wanted to Talk to Him About I, Robot

K-2SO is not the first robot Alan Tudyk has played. He also portrayed one in the 2004 Will Smith film I, Robot—and he initially thought that’s what Rogue One director Gareth Edwards wanted to talk to him about the first time they spoke.

Here Are All the Canceled Star Wars Video Games

The list of canceled Star Wars video games is a lot longer than just the lamented Battlefront 3, which was absurdly sunk by LucasArts and never materialized.

Star Wars: A Massive Rogue One Scene Was Secret Kept From The Cast

“They kept that from us!” Ahmed explained. “That was never in the script. We didn’t know about it! It was the first time we saw it, so it was like, ‘Oh okay, the film’s finished…’"

"I thought, one day, either at the premiere, or one of these conventions, I’d get a chance to talk to her. And it’s really sad that it’s not going to get to happen."