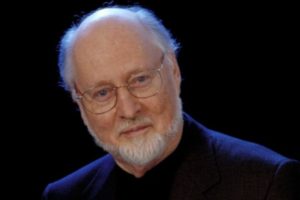 It’s impossible to imagine the Star Wars saga without the music of John Williams. Before he ever picked up a pen to write a note for the 1977 original he already had eleven Academy Award nominations and two Oscars on his mantle, for Fiddler on the Roof in 1971 and Jaws in 1975. Of the three wise men who were the cornerstones of Star Wars (Lucas, McQuarrie and Williams) his star arguably shone the brightest. While the world of sci-fi might have not seemed a natural fit for Williams, he had dabbled in the worlds of the fantastic with television scores for 60’s shows Lost In Space. The Time Tunnel and Land of the Giants. Segueing into major movie scores he quickly became one of the go-to guys for orchestral scores alongside such greats as Jerry Goldsmith, Elmer Bernstein and Ennio Morricone. With Steven Spielberg a very vocal advocate for Williams, Lucas chose him to be the man to bring the orchestral soundscapes of Star Wars to life.

The bulk of the film complete and with ILM working feverishly to complete the 365 complex visual effects that populated the movie, Williams and the London Symphony Orchestra recorded the score. Recorded over eight sessions at Anvil Studios in Denham, England during early March of 1977, the score was equal parts Richard Wagner and Gustav Holst. Familiar, to an experienced ear, fresh to those too young to hear much above the punk and disco of the time. Produced by George Lucas and supervised by Lionel Newman of 20th Century Fox, this score above all others is credited with bringing back the orchestral soundtrack in an era when it – like sci-fi itself – was on its uppers.

Released on double gatefold vinyl to coincide with the US release of the film in May 1977 it swiftly gained traction to become a mega-selling release. With 75 minutes of the 88 minute score included on the album – the limitations of vinyl and how much music could be included was still an issue in those pre-CD days – it truly became the soundtrack to children’s lives across the planet. Here in the UK it was a hit before it even arrived in cinemas, a success enhanced by the disco version released by MECO which was swiftly recorded in the summer of 1977 and became a smash hit in the US and here, where it reached number 7 in October of ’77, two months before the film arrived. As the Star Wars phenomenon grew bigger and bigger, in an age where the multiplex was only beginning to gain traction in the States and queues around the block were the norm for American kids wanting to see the movie, award nominations began to gather, and soon the score for Star Wars was scooping up nominations and awards to match its insane commercial success.

In seemingly no time at all, the soundtrack broke through the million sales barrier, then the two, the three and eventually passing four million copies sold to become the biggest selling orchestral soundtrack in history, a record that remains unsurpassed to this day.
The template was set, and in seemingly no time whatsoever, bombastic big orchestra scores were springing up to accompany mega budget sci-fi epics. Jerry Goldsmith scored Star Trek: The Motion Picture and Alien in 1979, while John Barry wrote the music for The Black Hole, Disney’s 1979 sci-fi offering which sunk into a box office black hole of its own. By 1980 and the score for The Empire Strikes Back, such elaborate and essential scores were very much the rule rather than the exception. Williams arguably outdid himself with the Empire score, coming off the back of Close Encounters, Superman and 1941 and for Star Wars going forward the template was in place. Return of the Jedi completed the original trilogy in 1983 and a 16 year gap consisting of more Indiana Jones scores as well as Oscar wins for Schindler’s List and the iconic Harry Potter and Jurassic Park scores would see Williams return to the sagas for the prequel trilogy, a criminally overlooked trio of scores that somehow evaded Oscar success.
In 2005 the American Film Institute heralded Star Wars to be the most memorable score of all time for an American film. In 2004 the Library of Congress entered it into the National Recording Registry, calling it “culturally, historically, or aesthetically significant.”

2015 saw the maestro return to Star Wars with the score for The Force Awakens, and his work continues with Episode 8 and 9. Michael Giacchino took the reins for the magnificent score for Rogue One: A Star Wars Story, showing that the innovations and decisions Williams took when writing the original score back in 1977 are just as vital and fresh today.