The year prior to the release of the crazily-anticipated Return of the Jedi saw another batch of releases. This time, H.C. Ford & Sons Ltd of London released an attractive set of plastic encased smelly rubbers including Chewbacca, Han Solo, C-3PO, R2-D2, Luke Skywalker, Princess Leia and Darth Vader. What better way to celebrate the release of the double-bill and key kids up for Jedi than that? 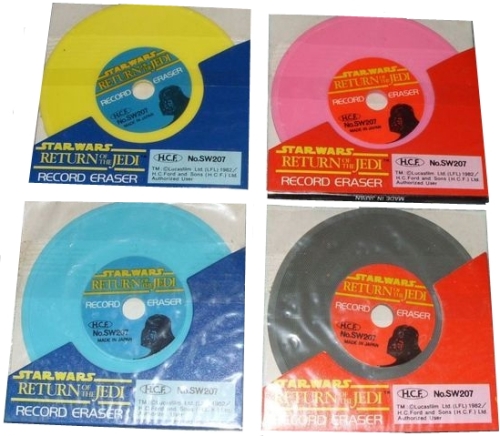 1983 saw a wave of product that not only dwarfed the comparatively small output of The Empire Strikes Back, in an age where sequels were not expected to do anywhere near as well as their predecessors, but also surpassed that of the 1977 original. Return of the Jedi was a movie monster, taking more money at the box office than Empire and only just falling short of Star Wars and the all-time box office champ E.T. Well-aware that – for now – this was the end of the saga onscreen as George Lucas turned his attentions to building Lucasfilm, Skywalker Ranch and other projects, the fans bought product in droves.

With the eraser sets being so popular, H.C. Ford carried on through Jedi and released a number of ranges including a series of 4 record-style erasers. These were individually sealed and came in pink, yellow, grey and blue and featured either Vader battling Luke or the classic image of George Lucas’ hands holding the lightsabre. These days, with vinyl making a strong comeback, these sets are more relevant and desirable than ever.