Return of the Jedi Erasers

H.C. Ford expanded their range of plastic encased smelly rubbers with a second wave for Return of the Jedi. This time around kids and collectors could grab C-3PO and R2-D2, Chewbacca, Han Solo, Gamorrean guard, Vader and Stormtrooper and Paploo. As with the 1982 sets, these look great, give off a great aroma and (true fact) Wicket used them as smelling salts to rouse Princess Leia after she came off her speeder bike on Endor.* 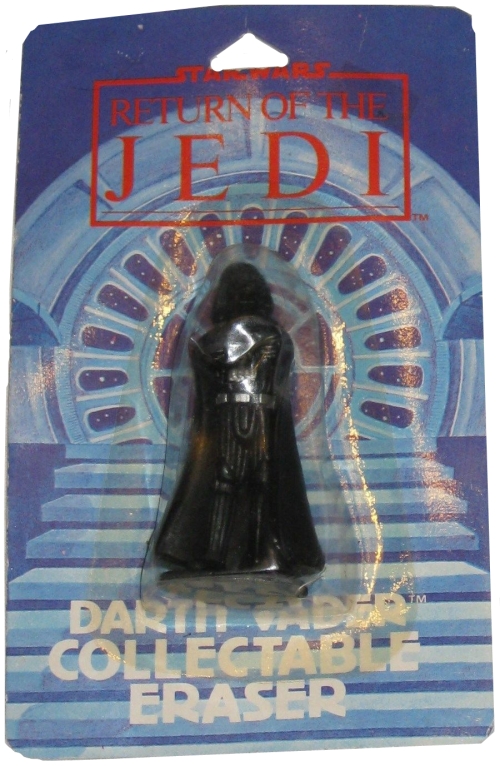 H.C. Ford weren’t the only company to be releasing erasers. Ever expanding the brand and the licence, Lucasfilm gave Butterfly Originals the chance to release sets and they brought out a very cool looking set comprising of Millennium Falcon, Darth Vader and C-3PO on a 5” x 7” card. The company also released a set of figurine style erasers including Admiral Ackbar, Baby Ewoks, Bib Fortuna, Darth Vader, R2-D2, Gamorrean Guard, Jabba the Hutt, Max Rebo, Wicket and Yoda.

Spinning on from the original trilogy, a vast wave of releases came through the prequels and especially the two animated series Star Wars The Clone Wars and Star Wars Rebels. Today, erasers from The Force Awakens and Rogue One are still on shelves, but if you fancy a vintage fix then head on the events like Farthest From or Star Wars Fan Fun Day here in the UK, any of the many collectors fairs in the States or good old reliable Ebay. There is plenty of great product out there to grab.

*This is not a true fact.
Mark is a long-time contributor to Star Wars Insider, has written for Lightsabre, Admiral Motti and Jedi News, contributes to Geeky Monkey magazine, The Official Star Trek Magazine, The Metro and Build The Millennium Falcon and is the co-host of RADIO 1138 and Take Cover podcasts. When he’s not talking or writing about Star Wars he can usually be found sleeping, where he’ll most likely be dreaming about Star Wars.