The second most feared bounty hunter in the galaxy. Killer of Wookiees. Partner to Ezra Bridger. Bodyguard to Boba Fett.

He was meant to be a throwaway character, but fans wouldn’t let him go. A fearsome bounty hunter, he mentored the legendary menace every Star Wars fan knows as the galaxy’s greatest bounty hunter: Boba Fett. He also partnered with Ezra Bridger to foil a criminal plot and transform himself into a misunderstood anti-hero. 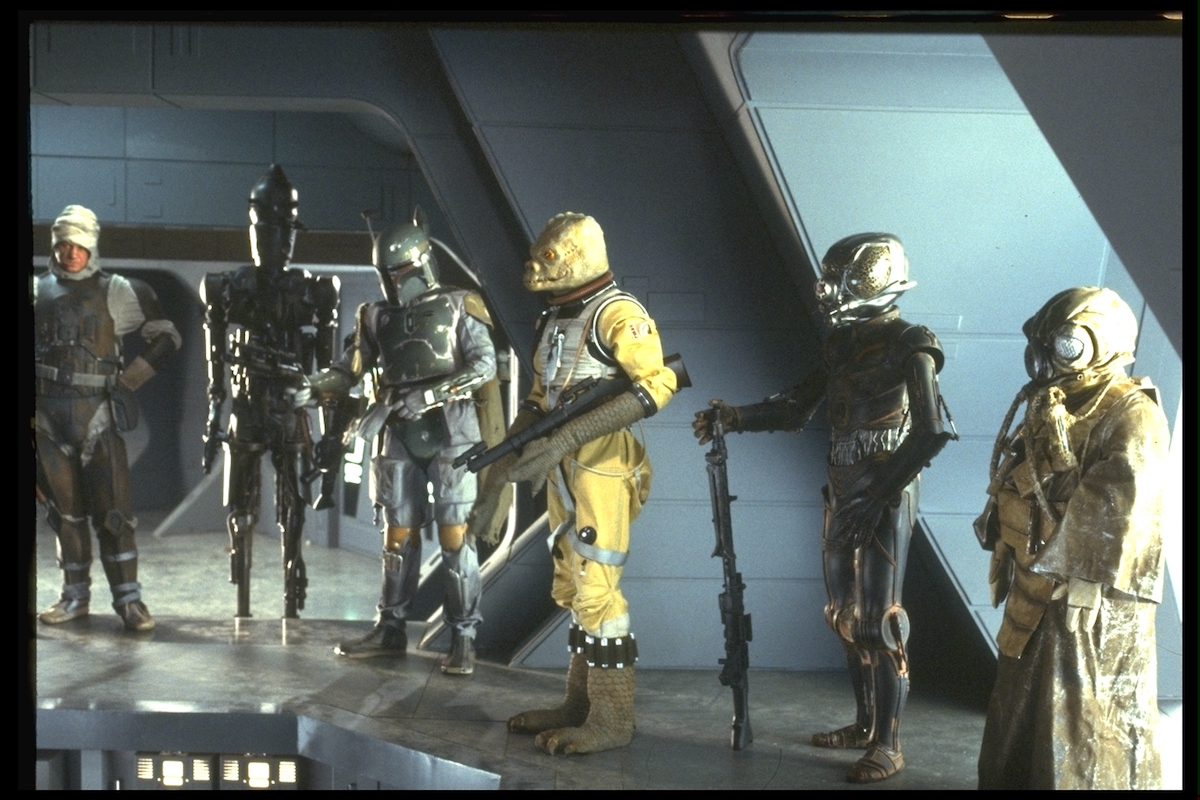 Bounty hunters aboard the Executor. Courtesy of LucasFilm/Disney.

Episode V: The Empire Strikes Back

stands, nearly forty years after its 1980 release, as the greatest chapter in not only the Original Trilogy but among all episodic Star Wars films. The reasons for the success and enduring affinity of viewers for The Empire Strikes Back are too many to enumerate here. In a film with so very many memorable scenes and intriguing moments one stands out. It occurs at the mid-point of the film, following the Millennium Falcon’s skin-of-its-teeth escape from the exogorth, the giant asteroid worm, and Luke’s confrontation with his own dark side in the Cave of Evil on Dagobah. A radial wipe transports us from the swamps of Dagobah to the bridge of Darth Vader’s gargantuan Super Star Destroyer, the Executor. The bridge command staff are uncomfortable at the assemblage of mysterious and exotic creatures that the audience instantly recognizes as special, dangerous, and decidedly far out of place on the bridge of the flagship of the institutionally-xenophobic Galactic Empire.

Except for the most prominent member, Boba Fett, these six individuals were meant as throwaway characters, “walk-ons,” in Hollywood parlance, never to appear again after this 43-second scene. The fans—especially fans who would grow up to create their own Star Wars chapters—had different opinions on the value of these throwaway characters.

Bossk and Boba Fett in The Clone Wars. Courtesy of LucasFilm/Disney.

Boba Fett appeared in all three Original Trilogy films, including a prominent role in the second half of The Empire Strikes Back, before going on to be a fan-favorite in novels, comics, games, television, and even other films, including many stories set after his apparent death in Episode VI: Return of the Jedi

. Without even including his prominent role as his own father, Jango Fett, in the Prequel Trilogy, Fett enjoyed ample screen time during which fans could develop a fondness for the galaxy’s baddest bounty hunter. Bossk’s popularity as the second most feared bounty hunter in the galaxy, however, is surprising as his only appearance in the films is the few seconds during the aforementioned scene and a contested Special Edition cameo in Return of the Jedi.

Bossk attracts attention in the scene for several reasons. Along with Fett, Bossk stands at the center of the assembly, and his yellow flight suit—a costume recycled from Doctor Who—contrasts starkly with the muted dark tones of the other hunters. The biggest reason he stands out and on nearly even footing with Fett is because only Bossk and Fett speak, with Bossk talking first. It’s a single guttural line growled at the unnerved Captain Piett, making Bossk memorable despite his total screen time of less than 60 seconds across the entire 40-year span of Star Wars films.

Bossk delivers his one line. Courtesy of LucasFilm/Disney.

What Bossk said was, “res luk ra’auf,” which has been officially confirmed by LucasFilm though the company has never provided an official translation for the Dosh language line. Of course, that hasn’t stopped fans from debating it. Mystery Science Theatre 3000 suggested that Bossk growled “shoe-polishing human, soon you will pay!” while other fans proffer various translations, including “I have lost my flip-flops,” “I like Turtles,” and “is there a nail salon onboard?” My favorite potential translation was suggested by RebelScum.com Forum member Trevagg: “manners are their own reward, gentlemen!”

Fans latched onto Bossk immediately, and when George Lucas allowed other creators to play in his universe, the reptilian bounty hunter was among the first characters to be drafted into new adventures. First in novels, then in comics, and on television by becoming a recurring character in The Clone Wars

, Bossk continues to hound the heroes and villains of the Star Wars galaxy both in canon and Legends. 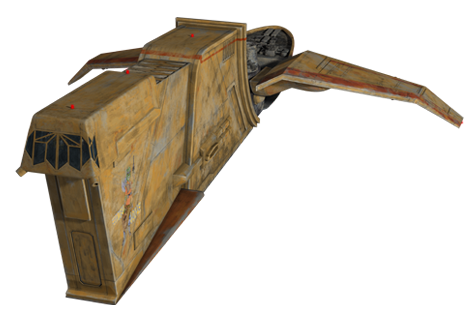 Bossk is a Trandoshan, or T’doshok, in his native Dosh language. Despite his single line in The Empire Strikes Back, Bossk speaks fluent Basic (effectively English). Hailing from the planet Trandosha, which is in the same star system as the Wookiee homeworld of Kashyyyk, Trandoshan society is organized around hunting, including its Wookiee neighbors who were often captured and sold into slavery by Trandoshans. An accomplished Wookiee hunter with a fondness for skinning and eating his prey, Bossk himself became a bounty hunter.

of novels by K.W. Jeter. 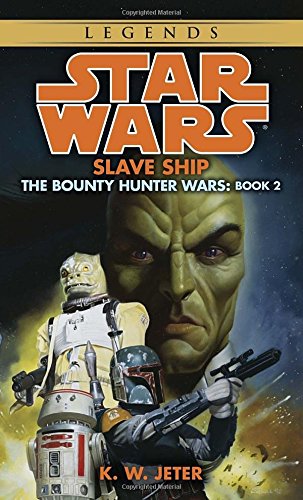 The cover of Slave Ship: Book 2 in the Bounty Hunter Wars. Courtesy of Bantam.

In the Bounty Hunter Wars, the Black Sun crime syndicate seeks to destroy the Bounty Hunters’ Guild by manipulating into conflict the Guild’s top members—Boba Fett, Bossk, Dengar, IG-88, Zuckus, and 4LOM—the six bounty hunters from the bridge of the Executor. The Bounty Hunter Wars is pure fan service to anyone curious to know the back story of the six bounty hunters called together by Vader. It’s a three-book story about the bad guys, following the meanest, toughest anti-heroes in Star Wars from one end of the galaxy to the other as they try to one-up, steal from, and assassinate each other.

With the exception of the anthology Tales of the Bounty Hunters

, which was non-canon even when the Expanded Universe itself was canon, The Bounty Hunter Wars were the first literature to explore Bossk’s story. It was far from the last.

Even as the Expanded Universe of Star Wars was declared non-canon to make way for new Star Wars films including Episode VII: The Force Awakens

and Rogue One: A Star Wars Story

, Bossk’s biography, with minimal change, was carried over to the new canon. He has since become the Clone Wars-era bodyguard and mentor to a young Boba Fett who, following his father’s death in Episode II: Attack of the Clones

, pursued revenge against Jedi Master Mace Windu. Along with fellow bounty hunters Aurra Sing and Castas, Bossk educated the young but already fierce Fett in the trade of bounty hunting as they tracked and attempted to murder Windu. They failed, of course, finding themselves in prison when Anakin Skywalker confronted and killed Windu in Chancellor Palpatine’s office.

After escaping prison, Bossk worked for Fett’s syndicate of bounty hunters, which eventually became the Bounty Hunter’s Guild. As a member of the Guild, Bossk was licensed with an Imperial Peace-Keeping Certificate authorizing him to ply his trade. He fulfilled many contracts for the Galactic Empire. 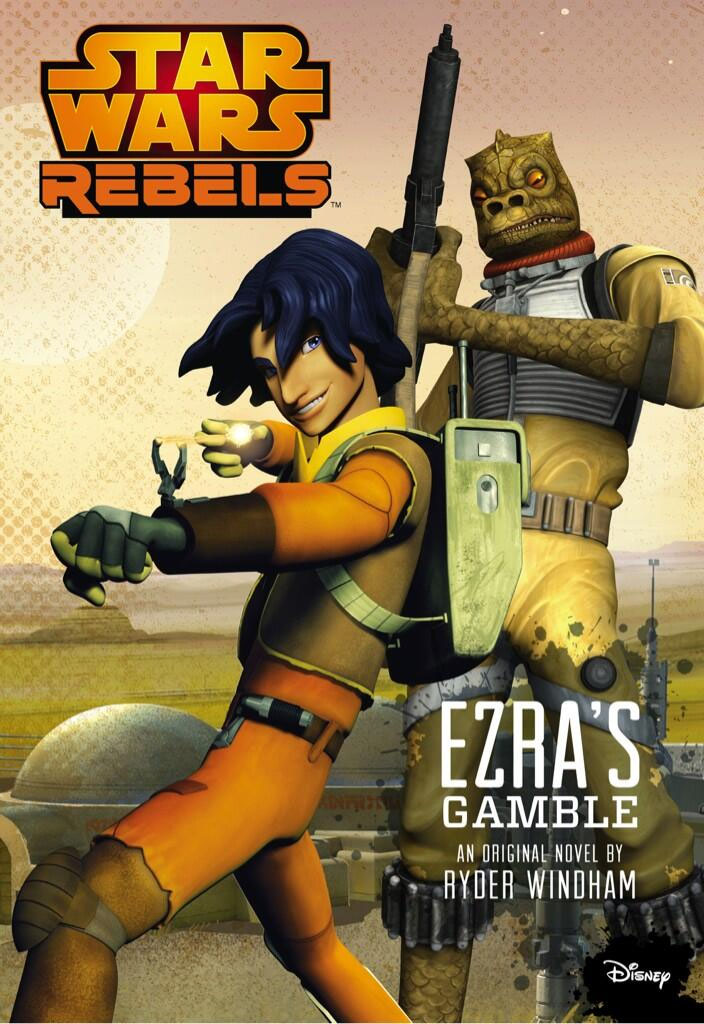 The cover of Ezra’s Gamble. Courtesy of LucasFilm/Disney.

While pursuing a bounty on Lothal, Bossk briefly teamed up with the Force-sensitive star of Star Wars Rebels

by Ryder Windham. The team-up turned into a much more complicated adventure than either had anticipated, involving a gladiator arena, the Imperial Security Bureau, and double-agents. The in-canon book made official much of Bossk’s history and story from the Bounty Hunter Wars, including his ship, the Corellian Enginering Corp. YV-666 light freighter, the Hound’s Tooth.

It was shortly after his time on Lothal with Ezra that Bossk answered the call by Darth Vader to hunt and capture the Millennium Falcon. Fett beat Bossk to the prize, of course. 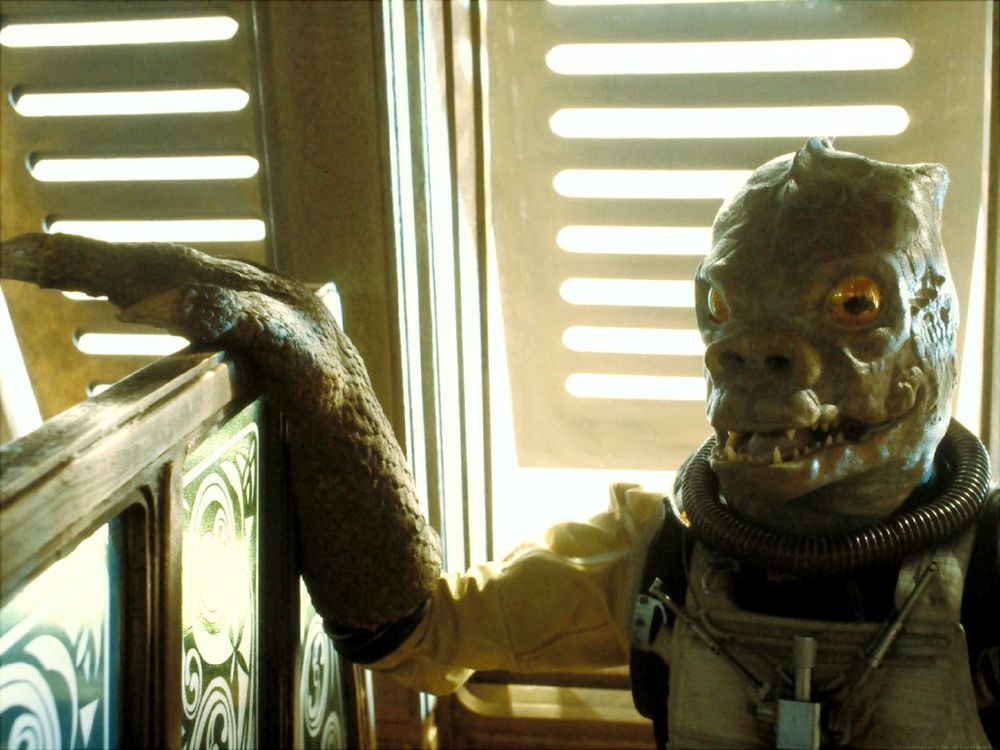 Bossk aboard Jabba’s sail barge in Return of the Jedi. Courtesy of LucasFilm/Disney.

Like Fett, Bossk was in attendance at Jabba’s Palace to witness the events at the beginning of Return of the Jedi. He was also aboard Jabba’s sail barge, the Khetanna, when it exploded, and is therefore presumed dead in-canon. He does later appear in Star Wars Legends stories, however, as Legends continuity place him elsewhere at the time of the Khetanna’s destruction.