Master of the Seventh Form of Lightsaber combat, wielder of the purple lightsaber, the galaxy’s second most powerful Jedi Master, he defeated Darth Sidious in single combat.

Master of the Seventh Form of Lightsaber combat, wielder of the purple lightsaber, the galaxy’s second most powerful Jedi Master, he defeated Darth Sidious in single combat. With but one more stroke of his violet energy blade, Jedi Master Mace Windu would have spared billions the nightmare of the Galactic Empire. Alas, he was betrayed and murdered by one of his own, Anakin Skywalker, before that fateful and just blow could be struck.

Having routed the source of both the corruption within the Republic and the ascending Dark Side of the Force, Windu, accompanied by three other Jedi Masters, confronted the source personified in Chancellor Palpatine, also known as Darth Sidious. Resisting arrest, Sidious’s assault killed Windu’s companions, but proved no match for the venerable Jedi Master from the planet Haruun Kal. Following a savage and brief battle during which Windu threw Sidious’s own Force lightning back at him by creating a closed-loop with his lightsaber, Windu was on the verge of ending the growing threat permanently, of forestalling the creation of Darth Vader, the Death Star Death Star, and an evil that would sweep the galaxy. Before the sagacious Windu could enact his judgment, he was disarmed by the corrupted Anakin Skywalker, losing his hand and his famous purple lightsaber into the skies of Coruscant. A heartbeat later, the rest of Windu would follow his hand, falling to his death, propelled from the Chancellor’s office by Darth Sidious’s Force lightning.

We all witnessed Mace Windu’s valiant and tragic end in Episode III: Revenge of the Sith

. Before that moment, he served the Force and the Republic loyally.

Most of Windu’s history is told through the animated series Star Wars: The Clone Wars

. Taking place between Episode II: Attack of the Clones

Calling on his decades of experience as a warrior and counselor, Windu advised both the Chancellor and the Jedi Council, the latter of which he was next in the line of succession to lead, following Grand Master Jedi Yoda. He directed campaigns and both ground and naval battles, and often dispatched Jedi, including Obi-Wan Kenobi, Anakin Skywalker, Ahsoka Tano, and Quinlan Vos, among others, on missions public and covert.

Mace Windu commanding clone troops during the liberation of Ryloth. Courtesy of LucasFilm/Disney.

He personally directed the liberation of the Twi’lek homeworld of Ryloth from the battlefield. The campaign was complicated and dangerous, starting with sending Jedi to break through a Separatist blockade before landing a reclamation force that Windu directed in the field through a protracted ground war to secure Ryloth city by city. Liberating the planet was a strategic victory for the Republic as well as for Windu himself, who used not only martial but political skill to engage and hold the cooperation of local resistance fighters.

Other victories at Malastare, Anaxes, and a costly defense of Dantooine cemented Windu’s reputation as a smart, bold, and capable war-time leader.

His intelligence, insight, investigative mind were also proven time and again during the Clone Wars. Windu helped to decipher several mysteries during his service to the people of the Republic, including that of holocrons stolen from the Archives of the Jedi Temple on Coruscant, routing of several imposters and saboteurs, and the discover of a plot to kidnap the Chancellor. Perhaps most significant of all, Windu helped to untangle the sad riddle of the murder of Sifo-Dyas, the Jedi Master in whose name the Clone Army had been ordered from the cloners of Kamino. 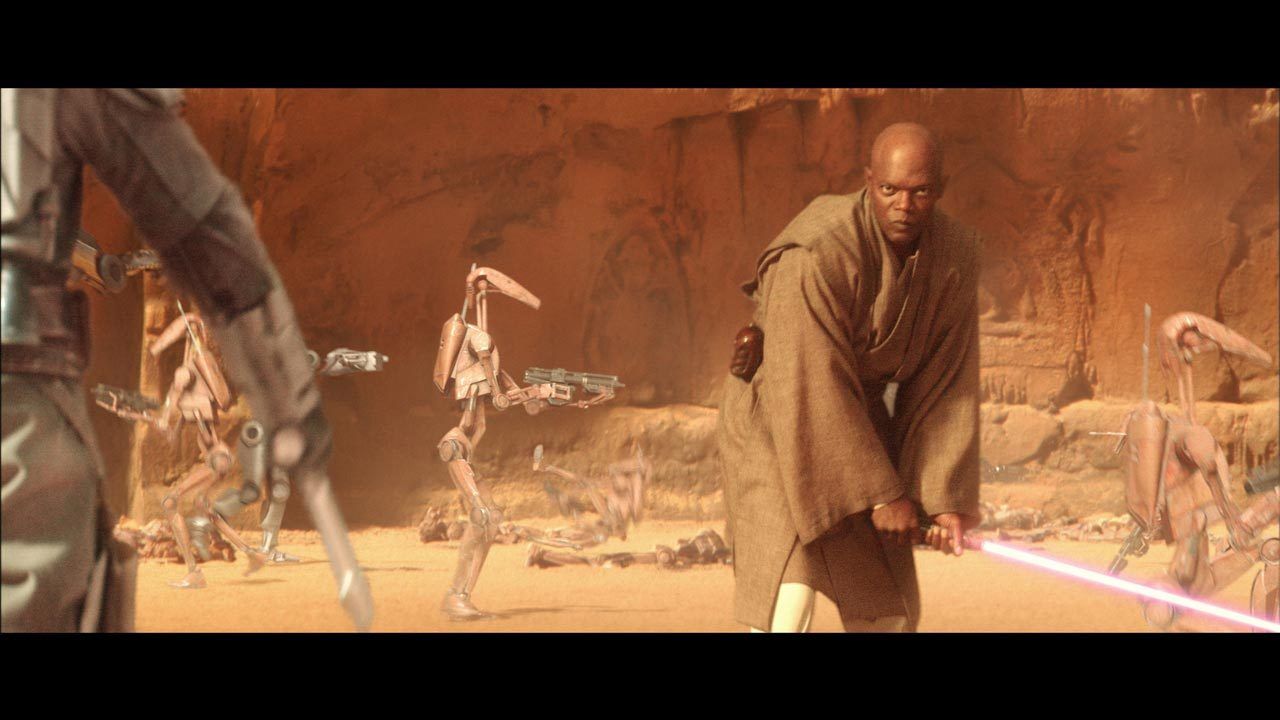 Mace Windu in Attack of the Clones. Courtesy of LucasFilm/Disney.

By the time Windu faced Darth Sidious in Revenge of the Sith, he had been victorious in numerous duels and engagements. His opponents included the likes of bounty hunter Cad Bane and the Nightsister Mother Talzin. He also narrowly dodged assassination attempts by the juvenile clone, Boba Fett, who, along with a retinue of protectors and teachers comprising accomplished bounty hunters Bossk, Castas, and Aurra Sing, sought revenge for Windu’s killing of Boba’s “father,” the clone template Jango Fett. 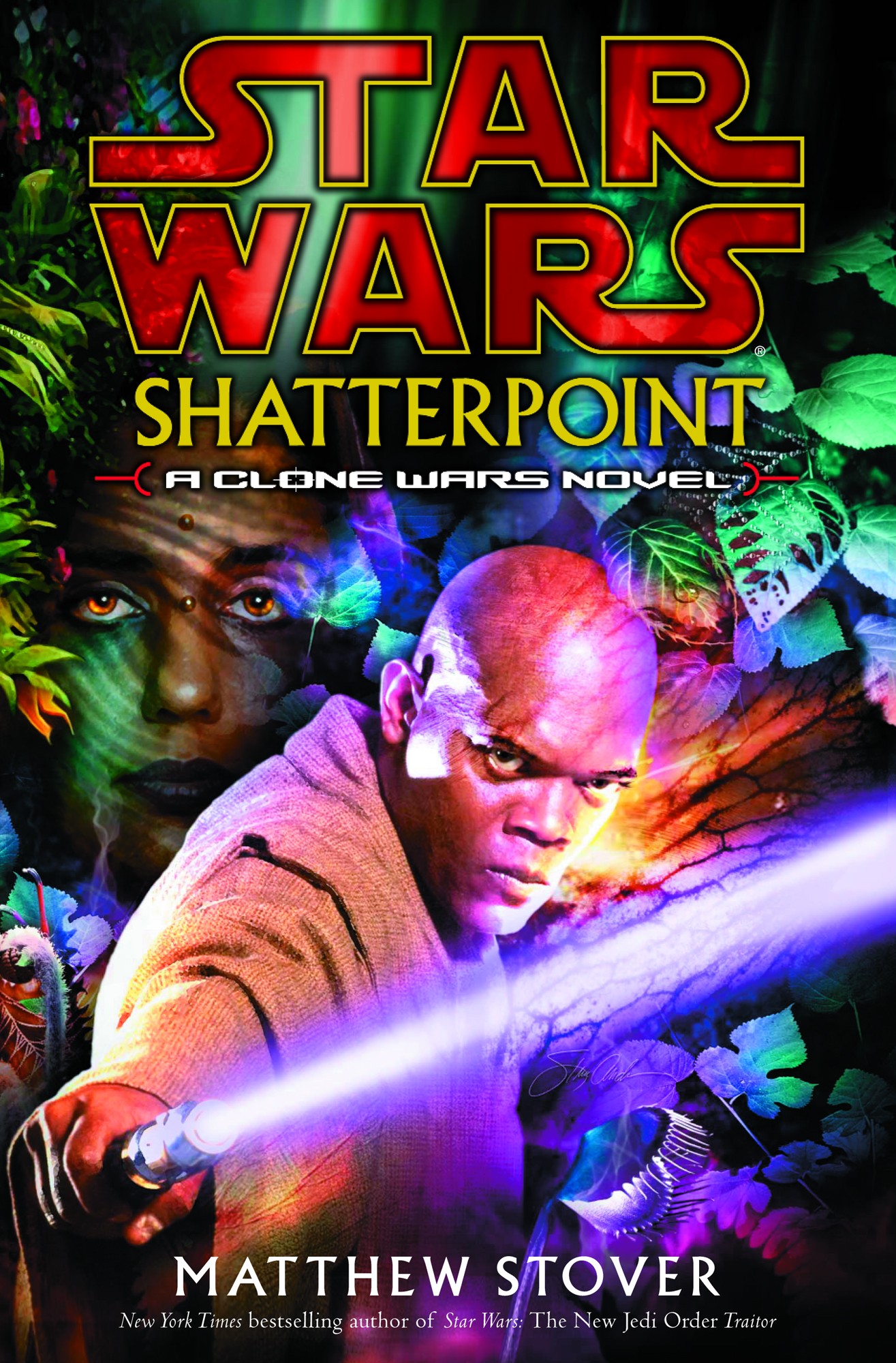 One of Windu’s greatest adventures was recounted by Matthew Stover’s novel, Shatterpoint

, the first in the Clone Wars series of novels. Shatterpoint sees Windu returned to his home, the jungle planet Haruun Kal, in search of his former Padawan, Depa Billaba, who has been lured to the Dark Side by Kar Vastor. Vastor, a military and spiritual leader of the Korunnai, the people of Haruun Kal, is a sadistic warlord whom Windu once called friend, but must now challenge for the lives and souls of the Korunnai and Billaba. Shatterpoint is the only novel to date starring Mace Windu, though some of the events it describes were later twisted and rewritten by the Empire.

Posthumously, Windu was vilified by the Galactic Empire to further its anti-Jedi agenda. Imperial propogandists released a series of excerpts from the Private Journals of Mace Windu, allegedly authored by the Jedi Master but, in fact, falsified. Intended to make the public believe the Jedi had been planning a coup that would result in a Jedi-led theocracy, the Journals included some facts and even factual recordings made by Windu during his time on Haruun Kal woven together into a fabricated narrative.

Some fans think Windu survived his fight with Chancellor Palpatine and Anakin Skywalker. As his body was never recovered from its apparent kilometers-high fall from the peak of Coruscant’s skyline. Though Windu has not, to date, reappeared, neither has his body. Some believe he followed in the footsteps of Elvis Presley, using his apparent death as a means of leaving behind the turmoil of his life to live out his remaining years in peace. 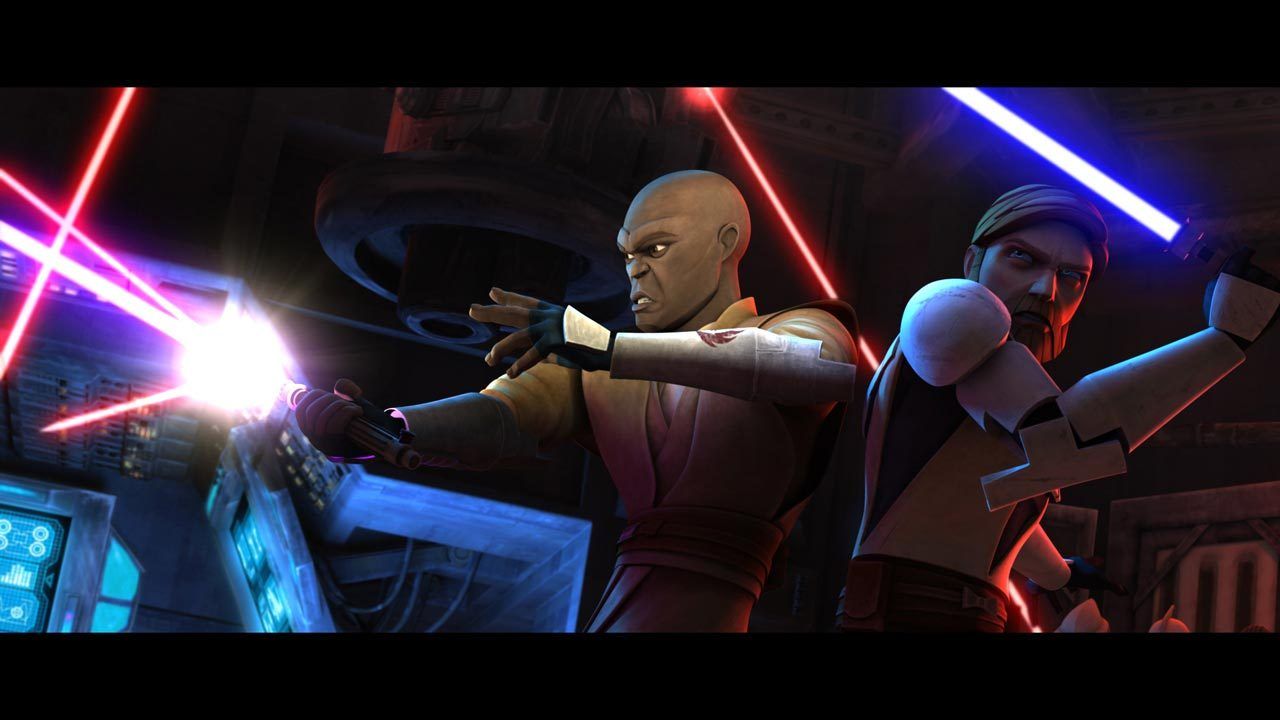 Mace Windu and Obi-Wan Kenobi during the Clone Wars. Courtesy of LucasFilm/Disney.

As a prominent on-screen character in the Prequel films and the animated The Clone Wars, Mace Windu is available for collecting and play in many action figure incarnations, including LEGO figures and a Transformer that morphs between Mace Windu himself and his purple Eta-2 Actis-class interceptor. Even more varied are the choices for owning his distinctive purple lightsaber, available in forms from set-ready prop replica to chopsticks.

You can also play as Mace Windu in any Star Wars video game set during the Clone Wars and the time frame of the Prequels. Such titles include Star Wars: Episode I: Jedi Power Battles