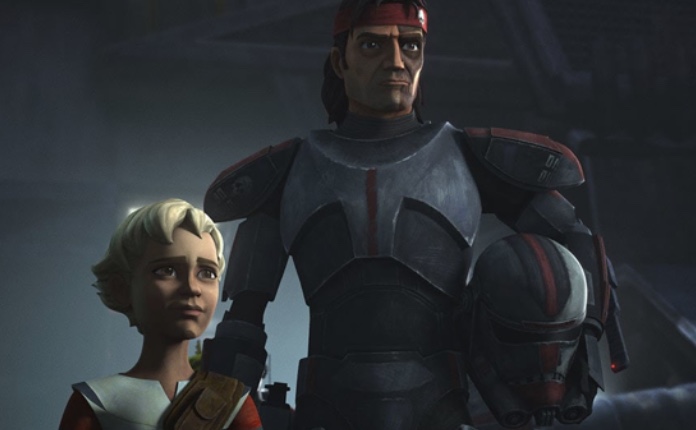 Executive producer Dave Filoni challenged the creators of Star Wars: The Batch Season 2 to push the boundaries of what’s possible with the show.

Star Wars: The Bad Batch Season 2 landed on Disney+ with a two-episode premiere this week, as Clone Force 99 attempted to liberate a war chest of riches from the deceased Count Dooku’s former palace on Serenno. While the mission doesn’t quite go to plan, the episodes do manage to give some insight into a potential road map for the season to come.

In an interview with Kristin Baver on the official Star Wars website, executive producer and head writer Jennifer Corbett and supervising director/executive producer Brad Rau talk about how this season will take the characters in new directions and how Clone Force 99 will continue to evolve.

“In the opening episode of Season 2, we wanted to do a crossroads mission for the Batch where they could either walk away from it or take a risk to get this war chest and hope maybe their wildest dreams could come true,” Corbett says. Dooku’s Palace proved to be the ideal location to stage the daring heist. “It’s creepy and there were lots of treasures in there, so we jumped at that,” Corbett says. “Dave adds that special sauce to the episodes.”

Executive producer Dave Filoni also contributed to Season 2 in a number of ways, including suggesting the addition of fan favourite Commander Cody to an upcoming Crosshair-centric episode and also challenged the show’s creators to push the boundaries of what they thought was possible.

“He’ll remind us, ‘Dare to be great,’” Rau says. “I think it’s important for everybody to hear that. We’ve gotta push as much as we can push.”

Star Wars: The Batch Season 2 is now streaming in Disney+ for all subscribers. The current series will conclude with a two-episode finale on March 29, 2023.