Officially, within the new canon of the LucasFilms/Disney-owned Star Wars, the story of the Twi’lek Bib Fortuna ends with the destruction of Jabba’s sail barge. In Legends, his story continues… or maybe not.

Bib Fortuna whispers to Jabba the Hutt. Courtesy of LucasFilm/Disney.

In the continuity of the new canon, Jabba the Hutt’s majordomo Bib Fortuna appears only twice, only on film, and only doing one job.

In Episode I: The Phantom Menace

Fortuna attends Jabba as the Hut crime lord of Tatooine presides over his Boonta Eve Classic pod race in observance of the Boonta Eve holiday. Fortuna is on Jabba’s balcony during the race, assisting—and waking—Jabba while Anakin Skywalker wins in a prophetic upset. 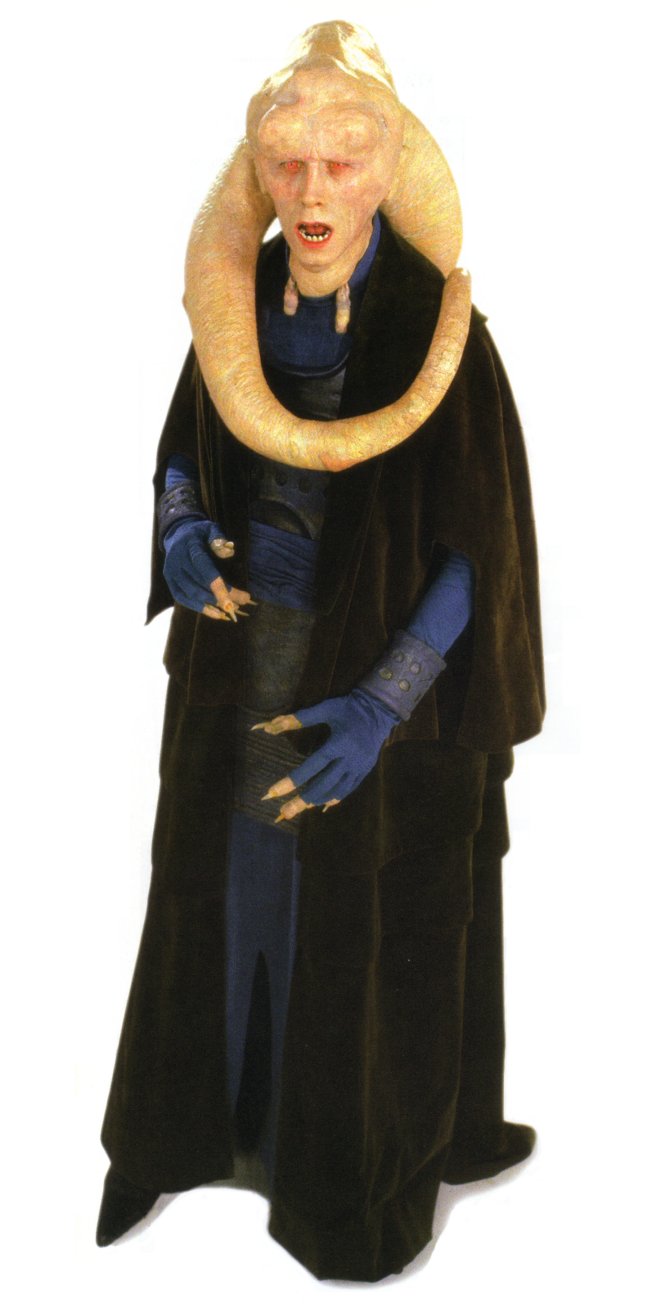 Thirty-six years later, Fortuna occupies the same position as Jabba’s chamberlain and palace administrator. Fortuna witnesses Jabba’s acquisition of long-sought Han Solo, now frozen in carbonite, as well as the culmination of the plan to rescue Solo. In Episode VI: Return of the Jedi

, Fortuna accepts the Trojan horse gifts of C-3PO and R2-D2 when they arrive at Jabba’s Tatooine palace ahead of their true master. He also admits the droids’ master when he arrives, and, under the sway of a Jedi mind trick, presents Jedi Knight Luke Skywalker to Fortuna’s own vile liege. Fortuna witnesses all the events that transpire after, including Skywalker’s escape and victory at the Great Pit of Carkoon. During that decisive battle, Jabba is killed and his sail barge destroyed. Whether Fortuna dies with Jabba is the question that creates a divergence between official and unofficial accounts.

The short story “Of the Day’s Annoyances: Bib Fortuna’s Tale,” published in the anthology Tales from Jabba’s Palace

, describes Fortuna’s escape from the explosion of the sail barge by abandoning his master and flying back to the palace on a private skiff. Back in the palace, Fortuna battles with others intent on securing the late Hutt’s palace and possessions for themselves. Fortuna wins with the aid of the B’omarr monks with whom Fortuna had previously allied in the latest of many plots to assassinate Jabba and subsume his criminal throne. The B’omarr monks are the hideous bottled-brain spider droids roaming about Jabba’s palace, a structure that was their monastery until Jabba raided it and took it for his palace.

Now floating in the nutrient bath and jar dangling from the bottom of the spider droid, Fortuna continues his criminal ambitions by sending Holonet messages and enlisting the aid of Firith Olan, a fellow Twi’lek and minor crime lord on the Twi’lek home world of Ryloth. Olan travels to Tatooine and turns the tables on Fortuna, forcing the former majordomo to slice various computer systems toward the goal of installing Olan as the new head of Jabba’s criminal empire. 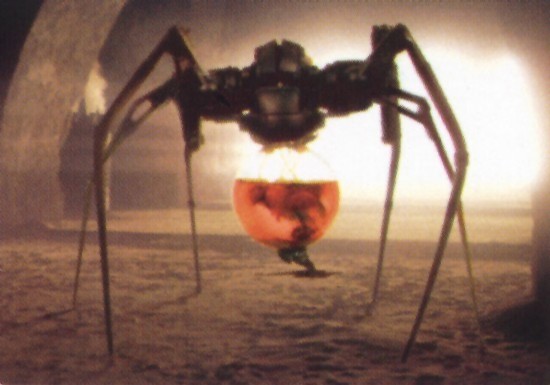 Olan is wounded by an Imperial officer during the execution of his plans not long after. Opportunistic Fortuna seizes the unconscious Olan and delivers him to the B’omarr monks whom he induces to perform brain transplantation once again, this time exchanging the brains of the two Twi’lek criminals. Olan’s brain replaces Fortuna’s in the spider droid while Fortuna is given to now occupy Olan’s body.

The newly re-embodied Fortuna sets his avarice gaze on the Lucky Star casino in Mos Entha. The Lucky Star is a hub for underworld activity nearly on par with Jabba’s palace in its heyday. To gain access to the Lucky Star, Fortuna pursues a relationship with Shiri’ani, the protégé of Jabba’s former chief rival, Lady Valarian, auditioning to be her majordomo. 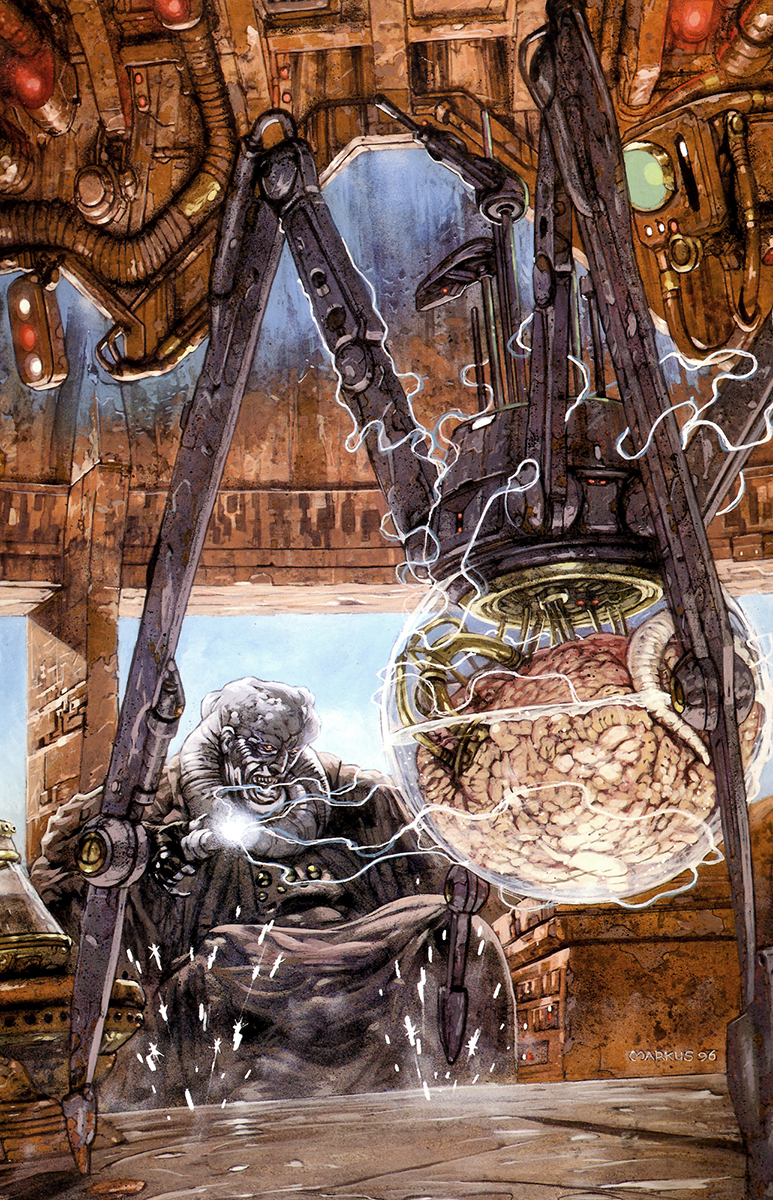 The anthology Tales from Jabba’s Palace, edited by Kevin J. Anderson and published in 1996, is one such non-Canon, non-Legends book—except at least two of its short stories are Legends and formerly Canon via Expanded Universe. With the continuation of “Of the Day’s Annoyances: Bib Fortuna’s Tale” in the pages of an Expanded Universe comic book, the story becomes official—as does much of the detail of Fortuna’s life and fate told through the other short stories in Tales from Jabba’s Palace. Another tale, “Sleight of Hand: The Tale of Mara Jade,” recounts Mara Jade, the Emperor’s Hand, infiltrating Jabba’s palace while on a mission. That story becomes a canonical part of Jade’s biography. These discrepancy puts Tales from Jabba’s Palace in a confounding place of being categorized as Tales but containing at least some official Star Wars history. There has been no official comment as to whether “Sleight of Hand” is the only canonical account and, if not, which of the other 18 narratives—most featuring Fortuna—are true. Nor can fans feel confident believing or discounting the most intriguing short story in the anthology, the one that details Boba Fett’s escape from the Sarlaac.

The ambiguity of Tales from Jabba’s Palace and its place in Star Wars Legends continuity makes Fortuna’s fate unknown. On screen, his demise is never shown, only assumed. It’s possible he survives and continues to operate as someone’s second-in-command in the Tatooine underworld to this day.

By virtue of his close orbit to infamous Outer Rim crime lord Jabba Desilijic Tiure, better known as Jabba the Hutt, Bib Fortuna’s name is forever linked with his former master’s. Fortuna appears in mention in dozens of novels, comics, and short stories, and seen almost without fail in every instance, in all media, in which Jabba himself is depicted. Fortuna has become a Star Wars stereotype for weak-willed, vile underlings, and his photo would be beside the definition for “slimeball” in a Star Wars dictionary.

Bib Fortuna beside his master, Jabba the Hutt. Courtesy of LucasFilm/Disney.